I can recall only two times when I had a near-death experience, both relating to water. It’s been twenty-seven years on this planet, and yet, I still am unable to tread water. One time, me and my friends were at a local indoor swimming pool and we decided to go towards the deep end of the pool. We followed each other around the perimeter, holding onto the edge with our wet hands. At one side of the pool, there was a covering made of slippery material. Once I got to that side, I noticed I was having a tough time gripping and, before you know it, I lose grip, sink, and started to panic. When they tell you your life flashes before your eyes, they were darn right.

FUUUUUUH, I didn’t even have my first kiss yet. I didn’t get to catch all the Pokémon. And I won’t ever know what happens in the season finale of Boy Meets World.

I was so fortunate that I was able to grab onto someone’s trunks and push myself up. Ever since then, I’ve had this fear of water. But what about death? 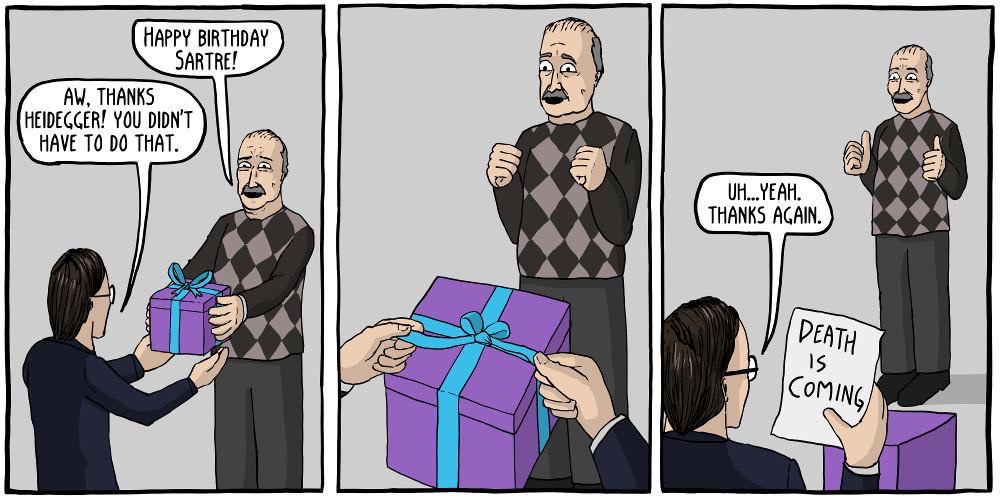 Do you fear that tomorrow may be your last day on Earth? Are you afraid of the idea of death, especially an early one?

Me? I don’t fear death. Why fear something that is inevitable and certain? If I could have it my way, I would like to enjoy a long, prosperous, and fruitful life; however, I know that I am not the one who will ultimately decide my fate. When the time comes, the time comes.
Actually, I’m kind of weird with how I think about these things. Sometimes I daydream and wonder if I were to go out, how would the event unfold? I imagine myself taking a bullet for somebody or pushing someone out of the path of a reckless driver. Some heroic BS like that. If my life is going to end early, at least let me go out with a bang.

And not only that, but I have already thought out about how my funeral procession will go. I’m already going to have a video prepared of me telling y’all that I’m dead. There is going to be a dance party with Filipino food. Hopefully, I have enough money in my estate to afford DJ Qbert or DJ Neil Armstrong to DJ the party. He better play Lil Uzi Vert’s XO TOUR Llif3. And Stevie Wonder (HE IS IMMORTAL, OKAY) is going to sing there. You all have to dance the Cha Cha Slide and Booti Call for me. There must be lumpiang shanghai and inihaw na pusit served. Eff it, have a boodle fight for me. I wouldn’t want people to mourn for me for too long. I’d rather have you all celebrate the life I lived. So, if this ain’t written on a will, then please, somebody, make note of this blog post.

Forgive me for using clichés but life really is what we make of it. I become disappointed when I see those around me who live life as if they are already dead. Without purpose. Moping around, spending each day in complacency, passiveness, inactivity. That is a more honest fear to have.

Some people live as though they are already dead. There are people moving around us who are consumed by their past, terrified of their future, and stuck in their anger and jealousy. They are not alive; they are just walking corpses.
― Thich Nhat Hanh

Dear friend, may your endure the hardships that life gives. May you find solace and peace from your grief and suffering. May you find the reasons to keep going. Keep fighting the good fight.

A death is another reminder for us to cherish those around us and to appreciate the moments spent together. Tell your folks you love them constantly. Inject joy into the lives of others. Give flowers not just when someone passes away, but when they are still alive and breathing. Pick each other up, especially during times of need. Don’t just text a hello, give a call or plan a meetup. Hug! Because who doesn’t love hugs? I know I’m not alone on this. We all could do a much better job of expressing ourselves to one another.

And by the way, FCK CANCER.

SONGS OF THE MOMENT

The Arcade Fire – Wake Up